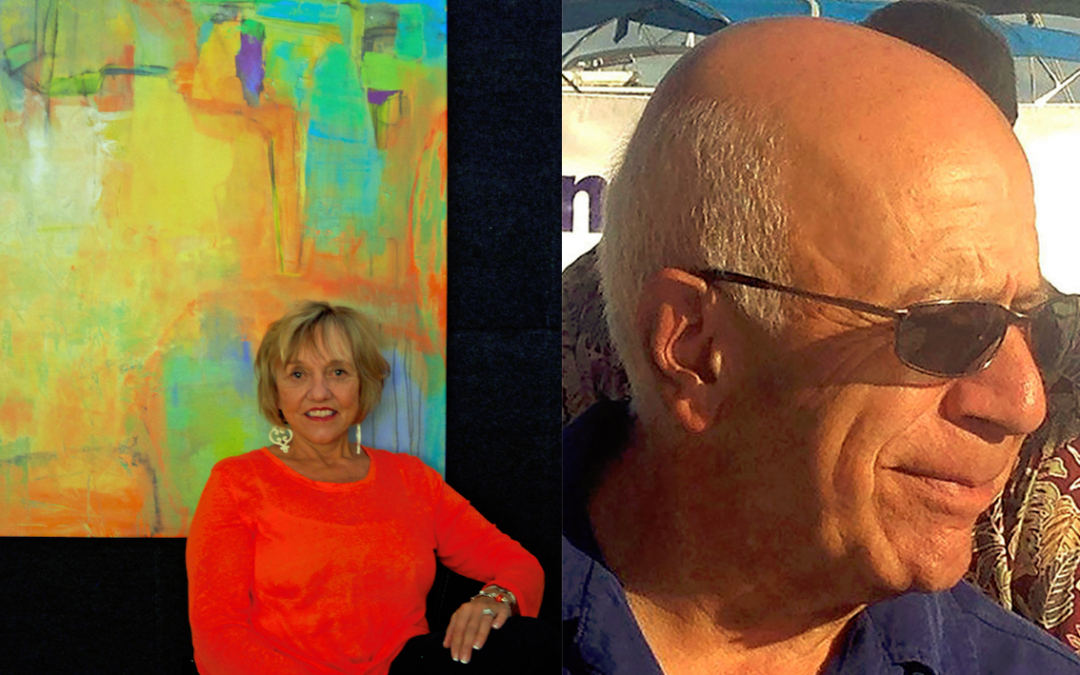 The Naples Art District showcases member artists every week through their Artist Spotlight! Series, highlighting their work and artistic methods.

The Naples Art District (NAD) artists in the spotlight this week are Maggie DeMarco and Ray Gallo.

Maggie DeMarco paints and works with mixed media/collage. Creating art has been Maggie’s focus for over 15 years, her professional career in painting beginning in 2005. “Having no experience with a paintbrush before that,” she says, “it felt like a magic wand was placed in my hand.” Maggie began by painting landscapes, but her work evolved to include other styles of art from abstract and still life paintings to reverse painting on glass. She studied for several years at The Rhode Island School of Design and has participated in many workshops with prestigious artists in the United States and Europe. Her work, she says, results from being fully present in the moment, “like a dance with [her] canvas and paint.” Maggie’s work, influenced by her surroundings, is full of vibrant color. She calls Narragansett, Rhode Island and Naples, Florida home at different times of the year. You can find Maggie’s work in Florida galleries, and more directly via her website. And if you are in the Naples area, you also can visit Maggie’s studio and gallery on Shirley Street in the Naples Art District to see some of her artwork in person.

Ray Gallo works with a wide variety of media, from painting and drawing (including pastels work) to photography and video. Ray was born and raised in Chicago where he studied fine art and design at the University of Illinois and design and visual communications at Illinois Institute of Technology. He began a long and successful career in advertising, working as an art director and creative director before relocating to Florida and returning to his roots as a fine artist. He says that Picasso influenced him in his early years, but that he has evolved as an artist such that “style has taken a distant back seat to content—the idea.” He attributes this change to his experience as a creative director in the advertising world, which he says taught him “to think both verbally and visually”—as demonstrated, for example, through pieces like the trees in his newly published book, A World of Possibili-trees, which he says is a concept he developed that uses digital paint and imagery in combination with “wordplay of the names of the trees along with poems written and illustrated about each one.” Ray says, “If you change the way you look at things, the things you look at change.” When Ray isn’t creating art, he relaxes by playing the piano and spending time with his wife, Linda, his two sons, and his four grandchildren. You can see Ray’s artwork in his online gallery, or at his Naples Art District studio at J and C Boulevard.

The Naples Art District (NAD) is home to the largest concentration of working artists in Southwest Florida. Professional artists like Maggie and Ray share their art and their artistic processes with visitors to their studios and galleries in the District. They exhibit their work and present special events for the public to learn more about art and different methods and means of creating it. The Artist Spotlight! series provides an opportunity for NAD artists to shine, while they connect and inspire people through their art. NAD publishes a calendar of events, classes, and workshops online for anyone interested in meeting member artists and learning more. Contact the Naples Art District online or by phone at 239-249-1977 for more information.